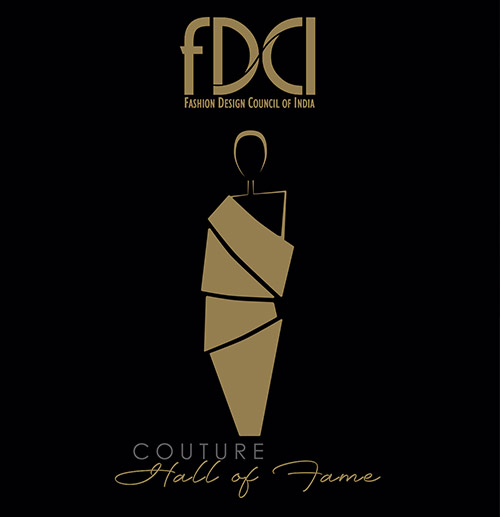 FDCI back with the second edition of Couture Hall of Fame

Anamika Khanna, JJ Valaya, Manish Malhotra, Asha Kochhar & Vidyun Singh were honoured for their contribution by the FDCI, and inducted into the Couture Hall of Fame

New Delhi, March 31, 2022: The second edition of the FDCI Couture Hall of Fame awards took place with a glittering ceremony at the Taj Mahal hotel, poolside in the capital, on Wednesday.

In continuation with the first edition, it was an evening of glamour, as the leading lights of haute couture, known for elevating Indian crafts with laborious techniques were given a much-awaited ovation.

Among those who won for excellence in nurturing the language of design included Kolkata’s Anamika Khanna, acclaimed for her timeless, detailed pieces. She was awarded by MD, Reliance Brands Limited, Mr Darshan Mehta.

The czar of embroideries, who adds his magical touch with a royal edge, JJ Valaya, was given the trophy by Indian economist and civil servant, Mr Montek Singh Ahluwalia.

The beauty of the evening was the soul stirring music by Taufiq Qureshi, who performed on the stage and kept the well-heeled audience mesmerised by his rhythm. While Sahil Vasudeva played on the piano keeping the night engaging as a seven-course meal was served, accompanied by violinist Madina Abaeva, who enthralled guests with her tunes.

The dapper emcee of the evening, Rajiv Makhni, kept the audience in good humour with his witty introductions, and décor brimming with a variety of vibrant flowers was executed by Geisha Rose.

Those present at the prestigious award function, were guests of the awardees at their reserved tables. The other attendees included FDCI's present and former Board members, as well as erstwhile couturiers, who have been part of the Couture Week journey.

“The FDCI has always believed in awarding those who’s contribution to the Indian design space has been exemplary. The dialogue they have with textures, movement, fabrics and craftsmanship over the years shows their innate ability to create passionately. It is this fervour, the FDCI and the Board of Governors have honoured this evening,” said Sunil Sethi, Chairman, Fashion Design Council of India.