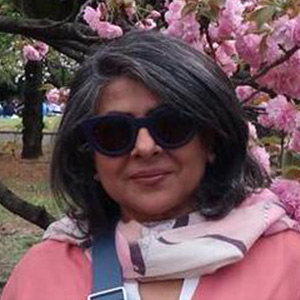 With a formal degree in textile designing and pattern cutting with a French instructor and a course from the prestigious St Martins College London combined with an inherent sense of aesthetics, Anjana launched her first collection at a fashion show in 1994.

This was soon followed by a solo fashion show an Indian Summer held at the prestigious UNESCO Hall in Paris and several showings in London, New York, Germany, Sharjah, Miami, Kathmandu and Hong Kong along with showings at the India Fashion weeks, Miami Fashion week and Toronto Fashion week.

The Anjana Bhargav label resurrects patterns and skills of ancient arts into the rhythm of modern life, keeping the accent always on comfort, wearability and affordability. The penchant is always on minimalistic styles that extend easyness and understated elegance.

Anjana was recommended by the Ministry of External Affairs to represent 'Women Entrepreneurs' at the OECD Conference held in Paris in the year 2000, where over 300 women entrepreneurs across the globe shared their experiences.

She participated at the Bollywood promotion at Selfridges. She was nominated for the breakthrough designer of the year award for the Lycra MTV style awards for 2003.

She was one of the first designer labels to stock with the Westside group of stores across the country. She has designed and fabricated jackets for the prestigious PATA Conference for Delhi Tourism. She has designed for the Usha International group of companies.

She has also made a mark in the corporate sector by designing and fabricating uniforms for Hotel Grand Intercontinental, New Delhi and the ITC Group of hotels across the country.

Anjana together with her daughter Ankita launched their label ANKY, a label that muses over the concept of comfort dressing and understated luxury in 2008.